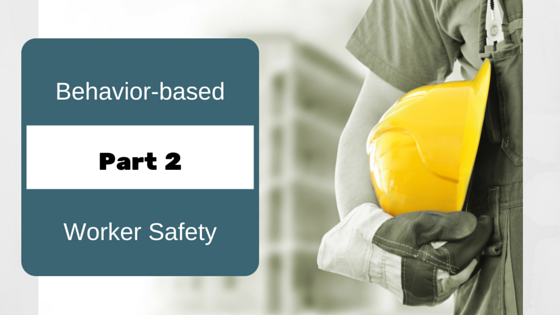 In last week’s post, I introduced you to the behavior-based approach to worker safety. While ergonomic design and regulatory compliance remain critical to worker safety, behavior-based safety strategies incentivize employees to take ownership of their own safety. Employees proactively identify potential hazards, helping prevent them from ever happening in the first place.

Below, I outline in more detail three reasons you should integrate a behavior-based approach into your food plant’s worker safety practices.

1.  It includes everyone, not just managers

A traditional approach delegates safety from the top down. It focuses on regulations and procedures to treat hazardous symptoms as they occur—a reactive approach to dangerous conditions. Often times, an external authority, like the Occupational Safety and Health Organization, checks in on a jobsite and enforces safety rules temporarily. But, the reality is, nothing really changes once that authority is gone.

A behavior-based approach, on the other hand, is a proactive program implemented from the bottom up. It focuses on worker behavior, addressing problems at their roots, based on leading indicators, rather than waiting for problems to occur.

This way, workers have the authority to identify hazards and make the food processing environment safer. Everyone is involved in enforcing safety precautions, rather than a few supervisors who may not always be around.

Behavior-based programs reward positive behavior. When employees receive positive reinforcement, they become comfortable calling out potential dangers in the workplace. Workers are encouraged to go above and beyond for safety, identifying hazards even when they’re in a plant area that isn’t theirs.

Traditional programs are often based on a numbers system—recorded incidents per man hour. When the goal is to keep the number of recorded incidents as low as possible, workers are discouraged from reporting hazards. Turning the other cheek to potential dangers is never a good thing, but the stigma that comes with reporting negative news can lead to prolonged safety issues. It’s better to encourage workers to speak up by using a system of positive reinforcement.

3.  It creates a culture of safety

Not only does a behavior-based program give workers an incentive to speak up about safety hazards, it also creates a culture where workers take safety into their own hands. You want your workers to view work safety as a mentality, rather than a set of rules not to be broken. Behavior-based programs give food plant workers a reason to look out for their peers as much as themselves, prioritizing safety as an integral part of the workday.