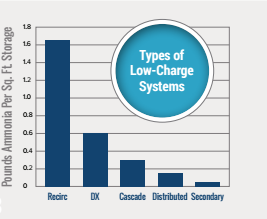 After months of discussions and hours of negotiations, nearly 200 nations have now reached a deal to limit the use of greenhouse gases worldwide. In October, world leaders agreed to the deal that would gradually phase out the use of hydrofluorocarbons (HFCs) starting in 2019.

HFCs, such as R22 and R134A, are common refrigerants that will be phased out soon. As a result, users are turning to low-charge packaged refrigeration systems, which utilize natural refrigerants. Why? These low-charge chillers use ammonia or CO2 and a secondary refrigerant to provide an environmentally friendly system, which is also much safer than traditional ammonia systems of the past.

Below are the five common types of low-charge packaged refrigeration systems: