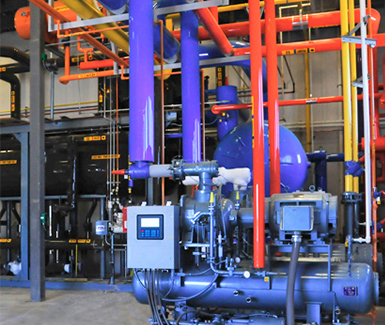 Changes such as machine room expansions or additional heat loads in the room (most commonly from additional motor horsepower) are changes that can often trigger a mandatory machine room ventilation update.

A machine room’s mechanical ventilation is comprised of two parts:

For the mechanical portion, there are typically three important rates to meet:

While the mechanical aspect is typically what we think of in terms of the system’s operation, automation is just as critical because it ensures the ventilation fans activate to deliver the required flow rates. Typical automation elements for ventilation systems include refrigerant detectors, temperature sensors and manual switches to trigger specific flow rates.

Both the mechanical side and automation side must comply to meet code.

For example, the IIAR 2 – 2014 emergency ventilation set point is 150 ppm. Just because you have the proper fan size, doesn’t mean you’re up to code if it’s not installed correctly and/or if it’s not controlled to meet the adequate ventilation rate.

Signs that your ventilation system may not be code compliant

There are some easy red flags to look for that may indicate your ventilation system isn’t up to code, including:

We often conduct machine room ventilation studies and calculations to analyze a facility’s current setup and determine which elements of the system are up to code and which aren’t.

If you already know your machine room is not compliant, Stellar can provide a package of bid-level drawings and documents so that you can bid the work out to multiple contractors.

If you’re looking for a single-source solution, we can perform a ventilation study, bid the work out, finalize the design and install everything for you. We never reverse-engineer to old codes, but rather seek to bring everything up to the latest standards to reduce risk for owners.

Code violations are not only costly, but neglecting proper ventilation can also create a much bigger problem in the event of an emergency. Don’t cut corners on this important, but often overlooked, aspect of your ammonia refrigeration system.

Want to confirm if your ventilation system is code compliant? Have questions about what to do next? Email me at foodforthought@stellar.net or leave a comment below.