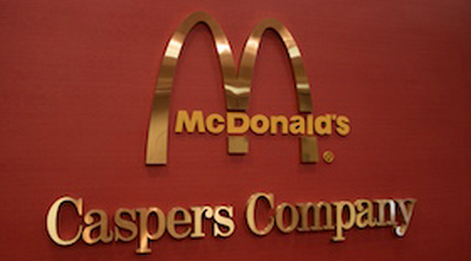 One of Florida’s oldest third-party logistics companies is introducing one of refrigeration’s newest innovations into its new cold storage facility: low-charge packaged refrigeration systems. With a focus on moving to eco-friendly refrigerants, McDonald’s franchisee Caspers Cold Storage and Distribution will be cooling its new warehouse with an ammonia/ CO2 and low-charge ammonia DX system. Because Stellar will be designing and building the new systems, Accelerate America editor Andrew Williams interviewed Stellar’s Brandon France to learn more about the project. Check out the feature article, “I’ll have CO2 and ammonia with that” in this week’s blog post to learn more about how the company is using low-charge refrigeration systems to lower costs, reduce installation time and utilize green refrigerants.

Caspers Cold Storage and Distribution is in the process of changing its identity as a business; part of that change is moving to environmentally friendly natural refrigerants. Accelerate America met with CEO Kim Seigler at the company’s Tampa, Fla. headquarters to find out more.

Caspers is one of Florida’s oldest third-party logistics companies. The business began in 1973 as an owner-operator franchisee of McDonalds restaurants, and currently has 53 outlets in the Tampa area; in 1998, Caspers also became a storage and distribution center for its restaurants.

Now, Caspers plans to sell off the McDonalds distribution business (holding onto the restaurants) in favor of starting a new warehouse and transportation operation providing frozen-food storage for other companies.

“We identified that there is a market for cold storage in this area,” said Seigler.

New facility to open in early 2017

The construction of the new facility – which will include a main freezer room and two blast freezers – would seem to herald a dramatic change to Caspers’ business model. “We’re going from servicing [our restaurants] to servicing many others,” Seigler said. “But we have the expertise, in the transportation, the distribution and the storage. So while it looks like a big change, it’s not.”

Caspers’ new 116,000-square-foot facility – slated to begin operations in the first quarter of 2017 – will rely on a combination of low-charge ammonia and CO2 refrigeration, in contrast to its existing 30,000-square-foot building, which has used an HFC system, noted Seigler.

The new system will be provided by Stellar, a design, contracting and servicing company for industrial refrigeration.

“Freon is not cost-effective”

Why did Caspers opt to go down this route? “Once you get up to that type of cubic feet, Freon is not cost-effective – so that’s first and foremost,” Seigler said. “Second, it’s about being environmentally conscious.”

Another important element is staying ahead of the regulatory curve. “If I’m going to be here for 25 years, I’d rather spend more money now – it wouldn’t make sense for me to put [a Freon] system into this facility, because I’d have to change it in a few years,” he said.

Caspers’ long involvement with McDonalds produced a list of contacts in the cold storage business, whose expertise Seigler was able to tap into when deciding which type of system to install in the new facility.

The approximate ammonia charge of the system is 5,500 pounds, well below the 10,000-pound threshold that calls for stricter regulations. The CO2 charge is approximately 3,000 pounds.

At the low temperature required for the blast freezers, the CO2 is able to operate with a positive pressure. “This makes it easier to keep contaminants and non-condensables out of the system, enabling it to operate at peak efficiency,” France said.

In addition, the system’s ammonia compressors operate variable frequency drives and reciprocating compressors on the CO2 side “for the best part-load efficiencies,” said France. “Each temperature level was evaluated and optimized for increased performance.”

France said he expects maintenance costs for the system to be lower than that of a conventional system.

Caspers, meanwhile, is putting the adoption of natural refrigerants at the heart of its wider corporate sustainability strategy. “We do anything that’s environmentally friendly and makes good business sense,” Seigler said.

With high-GWP refrigerants being banned or gradually phased out around the world, chemical companies are increasingly offering low-GWP synthetic replacements. Did Caspers ever consider taking that path? Seigler responded with an analogy. “If you buy a boat, do you buy one that has a hole in it and has been repaired? Or do you buy a new boat?”